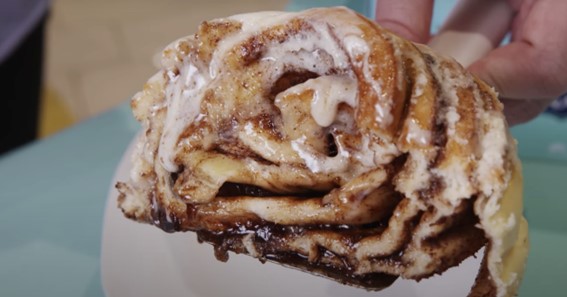 The Absolute Best Food Choices in the Cinnabon Menu

It’s not surprising that you may find yourself in a Cinnabon shop while you’re strolling around in your local mall. That enticing aroma is just irresistible, and you can’t help but think that you need a snack.

If you’re a newbie, then these are the menu food items you have got to taste first:

For lots of people who visit a Cinnabon shop, it’s almost automatic to get this item. You pay over $5 for a classic roll and you’re getting a lot more than your money’s worth. This is the thing to get at Cinnabon, and there’s just no arguing about it. It’s not just an opinion, as it’s so widely believed that it may a well be a fact at this point.

The thing is, this is the item that made the Cinnabon brand famous. When Cinnabon first started, it was selling just this one item. It’s also mainly responsible for getting you inside the Cinnabon shop, because its scent is so tempting. There are more than a few people around the world wondering if it’s possible to get scented candles with the scent of the iconic Cinnabon cinnamon roll.

First off, it’s huge. That may not be a good thing if you’re trying to lose a few pounds, but you’ll end up just doing more time in the gym to compensate for this. It may seem at first that you won’t be able to finish this all by yourself, but the taste just gets you going until you finish the whole thing.

Despite the large size, every layer of this cinnamon roll is amazingly soft. It’s no trouble to pull apart for each bite, which minimizes the fuss and the mess. You have the cinnamon sugar flavor filling up each layer, with the cream cheese frosting providing the contrasting tang. While at first glance it may seem as if there may not be enough frosting on the rolls, it turns out that there’s just enough of it to balance out the flavor. Each bite is just so relaxing.

Then you get to the center of the roll, which we’re told is the best part. It’s actually true, with the center tasting even better than your first bite at the sides. All in all, just get one of these and you get a good time at Cinnabon.

This is a relatively newer option, and you might consider getting this order if you’ve been asking for the classic roll too often lately. It’s a nice change, with the cinnamon sugar covering the baked donut holes, along with the cup of frosting. The CinnaSweeties are fluffy and light, which is a delightful change if you’ve been getting too much of the other menu items (many of which are, admittedly, rather over-indulgent).

The Cinnabon frosting is part of the deal, because without it, they’re a bit dry when you eat them as is. But the light and airy texture of the baked donut holes match perfectly with the richness of the frosting. Every bite is terrific, and you’ll have no trouble eating everything in the container.

The only drawback (if you’re nitpicky, that is), is that the cinnamon sugar covering the donut holes can make eating somewhat of a mess. But it’s a rather small issue, compared to the taste. Now that taste is a big deal!

Plenty of frequent visitors to Cinnabon love this option. It’s another large cinnamon roll, and instead of the standard cream cheese frosting you get a topping of caramel frosting with pieces of pecans on top.

Those who haven’t seen this before will probably comment on its huge size. It also looks simply decadent, especially with the pile of pecans on top that make the whole thing even bigger.

Similar to the classic roll, the size doesn’t reduce the quality of the texture. Every layer of the dough here is nicely soft and really moist. The taste of the cinnamon sugar is quite prominent, and it holds true even when matched with the caramel and pecans. You also get plenty of pecan chunks and caramel frosting to coat every bite of this huge cinnamon roll.

If there’s a downside to this, it’s that for some people, there may be a bit too many pecan pieces. Sometimes the pecan can just overpower the other flavors. But only a few people think this, as many more say that the balance of flavors is just great.

While a rather sizable number of people have been disappointed by the classic BonBites, this version is much better. It starts with the amount of the toppings, with enough of the caramel drizzle and pecans to cover each roll. That means you don’t have to suffer a bite without the flavor of those toppings.

The texture here is also better, although the dough is still unfortunately dry. At least the caramel sauce does a better job of covering up the dryness, while the pecans offer a crunchy distraction. All in all, it’s not bad.

The Top 5 Benefits of Using a CPAP Cleaner